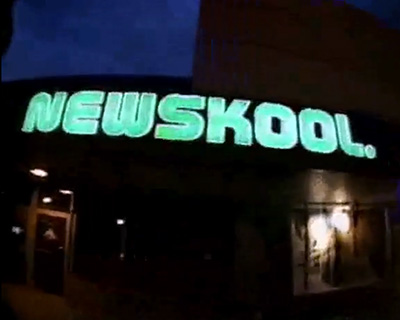 Back in the day Long Island skateboarders had New Skool skate shop located in Sayville, NY. The shop opened in the late 90’s selling skate, surf, snow and street wear brands out of a small space and eventually expanded to a larger space housing a 4′ indoor mini ramp. Before closing in the late 2000’s, New Skool was a popular destination for skate demos & tours hitting up the east coast bringing pros and crews out to LI from all over. Owners Jackie & Darren employed many known LI skateboarders throughout the years, even Anthony Pappalardo worked there at some point. The skate team went through a few generations from Chris Kent to Keith Denley and thanks to Mike Lent & Paul Braun in 2003 a full skate video titled “The New Skool Web” was dropped.

The New Skool Web (originally released on VHS) includes full parts from team members, groms and a Rampage skate park montage. A true time capsule preserving LI skateboarding and LI skate spots in the early 2000’s. Shout out to Jackie, Darren, Seta, Nova, Mark and the rest of the New Skool family for all the classic memories throughout the years! Watch the New Skool Web parts embedded below.

If anyone has any great New Skool memories or New Skool links please comment below.

Welcome To The New NYSkateboarding.com! (2010)