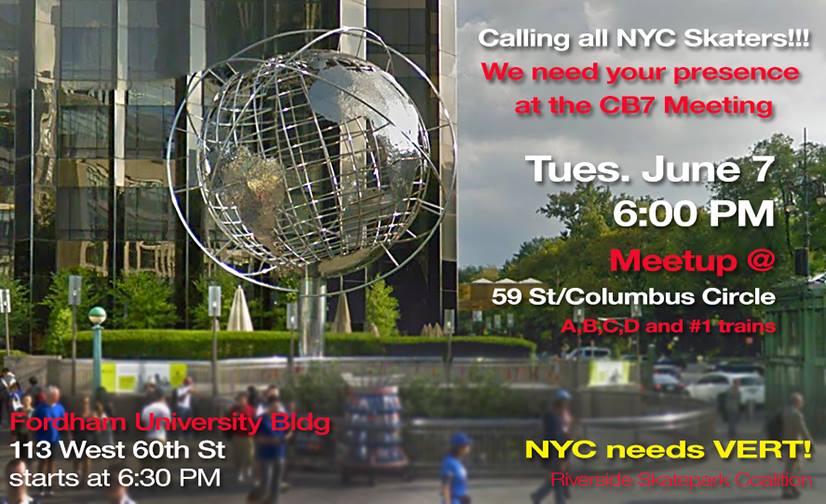 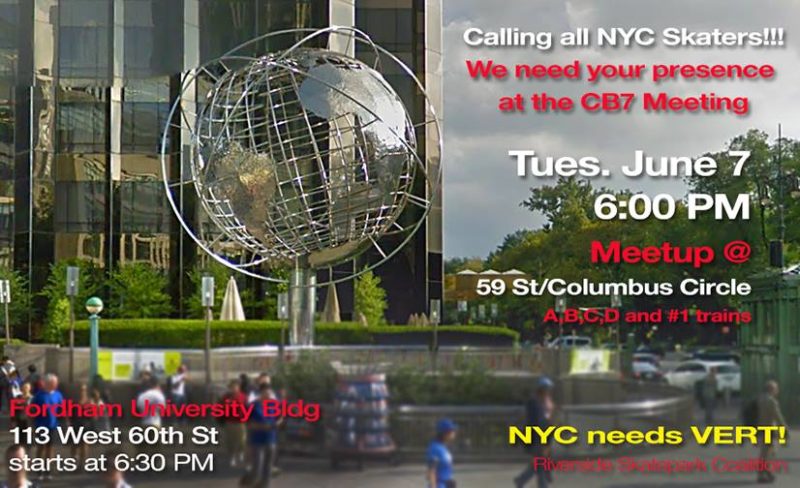 It’s not too late to voice your opinion regarding the new Riverside skate park design. Staff members at Parks Dept. and Councilman Mark Levine’s office have absolutely no idea of a unified opposition to the Riverside design.

To help, please send an opposition email to the following 8 email addresses. (separately) and plan to attend the CB7 meeting scheduled for Tuesday 6/7 @6pm (flyer above).

Subject Line: Riverside Skatepark redesign does not serve the needs of the community

Initial reception to the New York City Parks Department’s proposed skatepark design intended to replace the existing Riverside Skatepark facility has been met with a unanimous cry of disappointment and anger.

• The new Riverside Skatepark design proposal fails to fulfill the needs of the community. It’s a weak street plaza-focused design and a complete reversal of the parks original design vision.

• The outcome is contrary to the need of the skating population.

• The proposed design is exclusionary to a substantial percentage of its citizen user base, which are transitional skaters (people that skate larger sized bowls and banks and half pipes). Even more alarming: NYC Parks has built about 20 small street plaza skateparks while ignoring the need for well-balanced skateparks. So this trend amounts to policy not just for Riverside, but all its projects in recent memory.

• The new design should adopt the original intention of the Andy Kessler facility, which is a transition-focused skateboard park with diverse elements for Beginner, Intermediate and Advanced transitional elements alongside a Street Plaza.

• The proportions of space allocation, for Beginner, Intermediate, Advanced and Street for the new design should roughly match existing Riverside Skatepark facility.

• That NYC Parks Dept. indeed has the best of intentions in it is creating skateparks city-wide. This is a great thing and we love this. We believe that these mistakes are an understandable result of the community needs being understudied.

• The Riverside Skatepark location is the most important and significant location currently being developed on the East Coast. We’d like the City of New York, W Architecture and Landscape Architecture, LLC and whatever vendor it chooses to design and build to frame the design with this in mind.

• Arbitrary and capricious:  Historically, NYC Parks Department has adopted an ad-hoc regulation of a three-foot height maximum for it skatepark banks. Nowhere in the NYC Parks Department skatepark guideline is a three-foot height restriction listed. This insistence of the ad-hoc regulation is arbitrary and capricious and has the direct effect of denying recreational use and artistic expression of a substantial percentage of the City’s user base. The City of New York is decades behind the rest of the world in this regards.

• Another myth is a limit to the dig depth due to connecting into the existing drainage system. A dry well storm water disposal system as allowed by NYC building code Section PC 1114 and allows you to dig deeper.

• New York City has the largest demographic of skateboarders in the world. Let’s build them world-class skateparks. Let’s not miss the opportunity to create thoughtful, destination-quality skating elements. The best analogy here would be: where would our tourism business be if we forced the theaters to produce third-rate shows.

• Early in the design process, the Riverside Skatepark Coalition submitted design suggestions based on a wide survey of users. This design endorsed with a five hundred signature petition. We’d like to consult on the elements for the replacement park.

• We’d like to see some other design ideas for a robust, fully featured, forward-thinking skatepark for Riverside Skatepark that works both for the skaters and residents of the upper west side.

• Perhaps additional vendors for the design and construction should be considered at this time. There are regional vendors that are perhaps more progressive and responsive than California Skateparks. (Worthy of note here is that the representative that California Skateparks sent to the design unveiling was very forthcoming that he had zero knowledge of the project. He was also an hour late due to another, clearly more important, project). 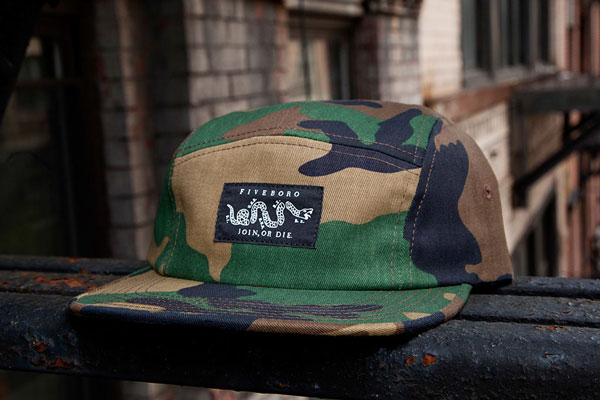 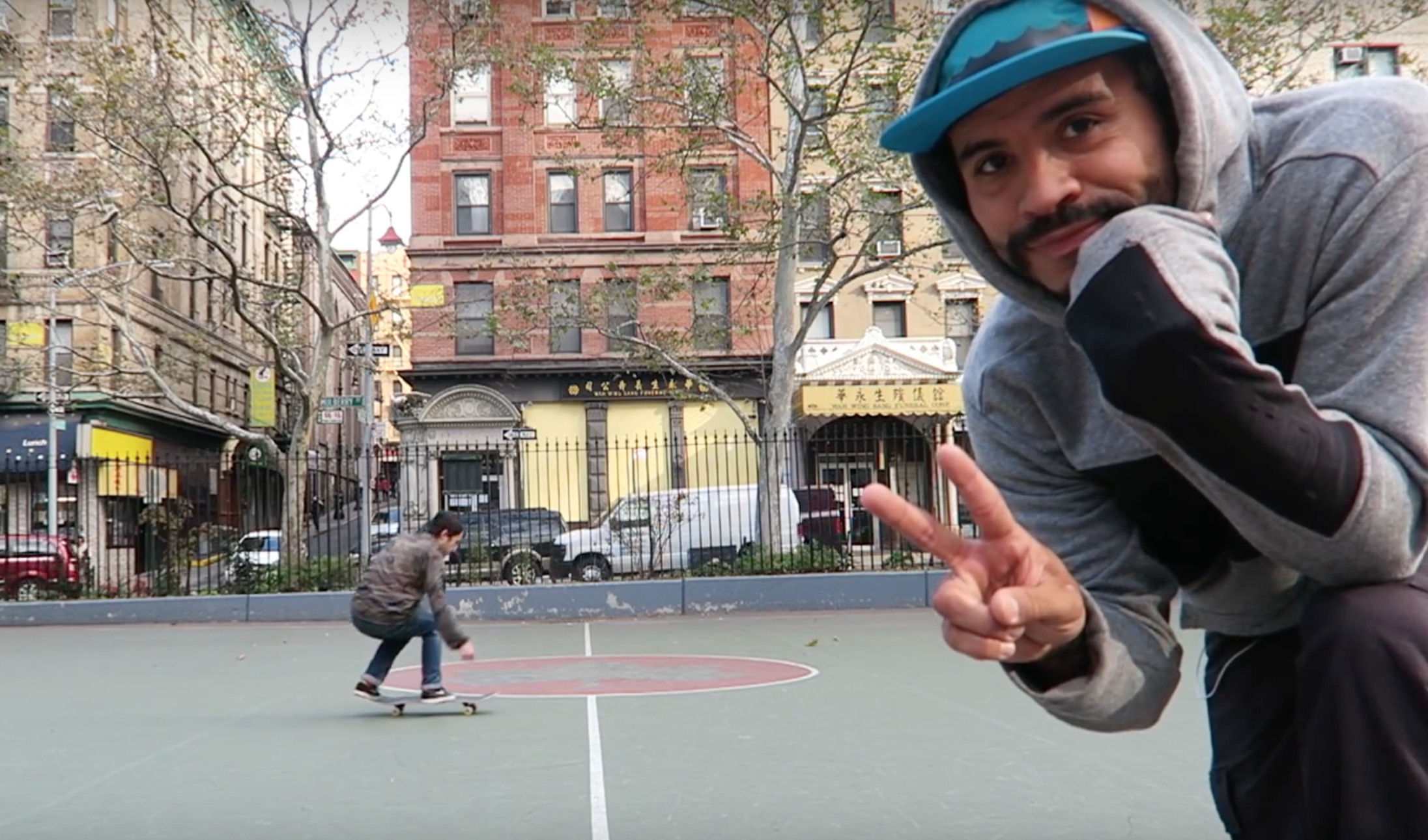 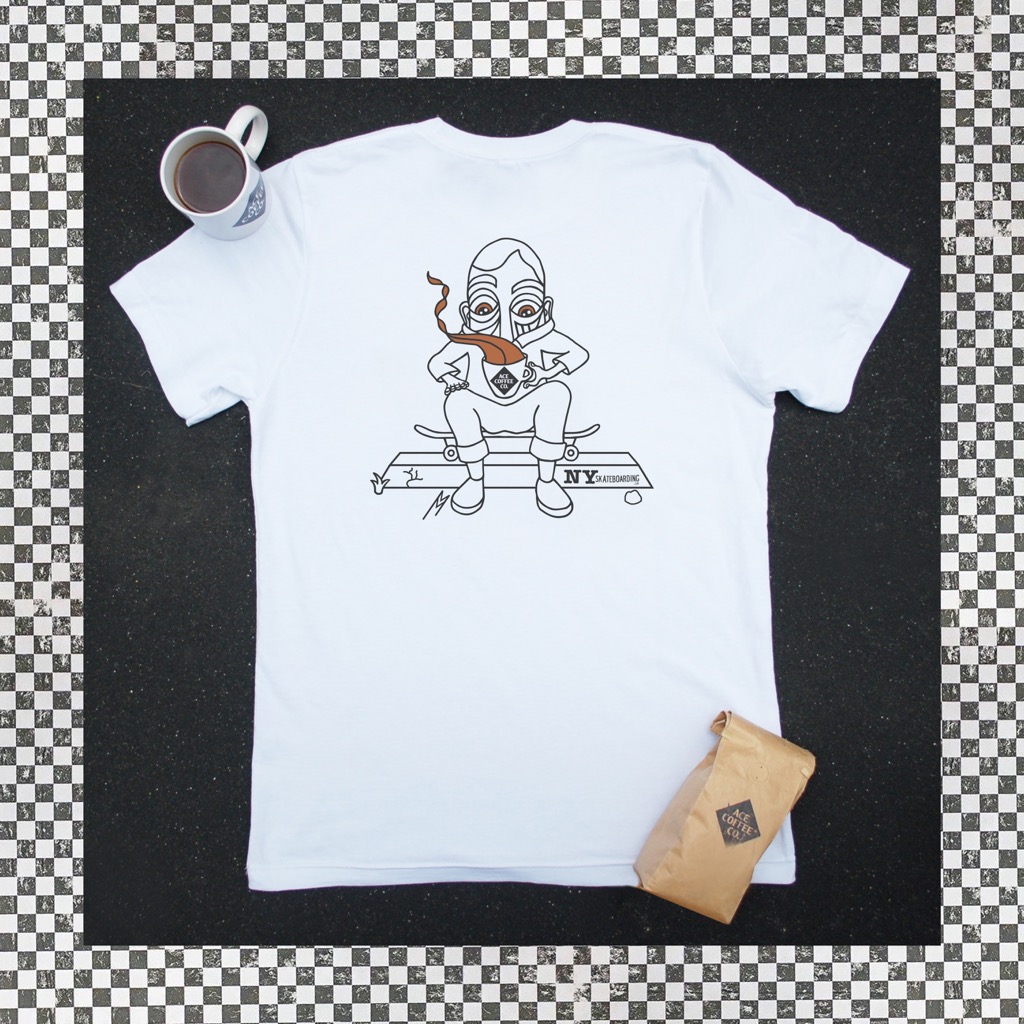