Each week in February we’ll post full parts from the Number Nine “Another Number” video (released in 1995). Number Nine was the original name for what’s now known as Chapman skateboards. Gregg Chapman started the company back in 1991 out in Bayshore, NY and grew to become a major East Coast manufacturer in just a few years with the help of their biggest client – Zoo York. Chapman currently manufactures boards for multiple brands (including their own) up in Maine. Gregg and his brother Glenn also maintain a shop in Babylon, NY and a showroom in Deer Park, NY.

“Another Number” (edited by Ray Frech) takes us back to the ’90s and features the Number Nine team, which at that time included Frank Gerwer, Ray Wong, John Oswald, Brett Peterson, Scott Sutherland, Chris Steinz, Tom Feeney, Walter Hasim and Kevin C. Most of the footage was shot at Long Island’s Northport Pipeline – a hot spot during the ’90s. Other footage includes a mixture of some NY spots and of course the Brooklyn [small] Banks.

* special thanks to Ray Frech for sending us a cleaner version, our VHS rip was pretty jumpy, thanks Ray! 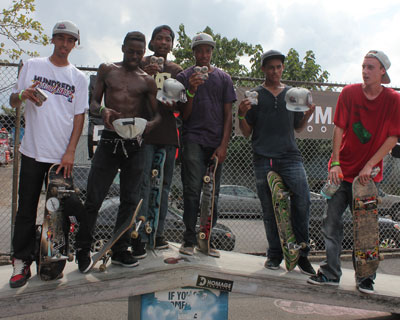