OG New York skateboarder and founder of Mighty Healthy – Ray Mate spent some time with us to answer a bunch of questions at his midtown, garment district office. Check his answers accompanied by some old school photos below in another NYSB Q&A feature.

Full name? Raymond Mate’
Where r u living currently? Bayside Queens
What year did you start skating? I would say it was like 1988.
Where are we right now? We are in Midtown next to Times Square (Garment District).

How did Mighty Healthy come about?
MH started in 04, we started off doing graphic T’s and then after a few years it became a full time gig for me. I was always into clothes, Polo, sneakers and outerwear. I always loved gear ever since back in the days. Vision Street Wear and Stussy made really cool stuff, even Powell used to make all over print shirts with their designs. Skate sneakers like Vans and Airwalks were always making cool kicks back then. I’d always get the best compliments rocking different brands that what people were used to. I’ve always been into apparel, that’s how Mighty Healthy was born. I thought maybe I could do my own brand and hopefully someone would be able to connect and relate to what a brand that I put together. MH is a skate lifestyle brand so that will always inspired by Skateboarding.

Where did the name Mighty Healthy come from?
It’s from a Ghostface song off Supreme Clientele. Just sounds cool!

What’s your favorite spot of all time?
BK Banks, the Pan Am building and the White building. 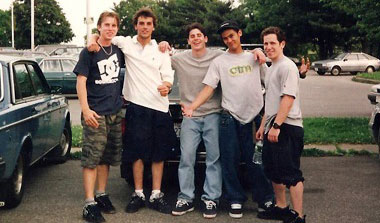 Heelflips or Kickflips? Heelflips
Grinds or Slides? Slides
Regular or Goofy? Goofy
Nollie or Fakie? Fakie
Pants or Shorts? Oh man pants
T’s or Hoodies? T’s
Hi Tops or Lows? Doesn’t matter but Hi Tops are better when you are older
Trucks Tight or Loose? They say my trucks are kind of tight… I’m old [laughing]
Backside or Frontside? Either or
Pizza or Tacos? Pizza man!
Rap or Rock? Both

Skateboard setup?
F – The first board I did tricks on was a disgusting Vision Ken Park that I had to scrape up money from my savings and my cousins chipped in and we bought it when we were in Tom’s River NJ. It was the most disgusting setup ever it had like lime green triangle grip tape and it was a real skateboard, it was awful.
L – I’ve been skating the same DLX board for awhile because I ‘haven’t been skating a lot cuz of work and daddy life which is a pretty poor excuse but it’s a red businetz it’s actually pretty legit – the best setup … Thunder trucks, Spitfire wheels… pretty much DLX kit (laughing) thanks Mickey!

Band?
F – Man that’s a trick question. I would have to say I don’t know – Beastie Boys, Operation Ivy and Bad Religeon I know that doesn’t make sense but at the same time I was introduced into that type of music and I liked both bands equally the same.
L – I would have to say Wu-Tang (laughing), I would say the last band I was dedicated to watch… I remember even watching them at trafalgar square in Queens and someone started shooting in the crowd and one of my buddies – Jon Buscemi and I started running and hid behind a wall because we didn’t want to get shot

Skate Website?
F – OfficialNewYork.com, I used to check that site a lot and I’d have to say Chromeball Incident too.
L – Hellaclips… it’s like the Worldstar Hip Hop but for skateboarding.

Skate Crew?
F – HUF, Giovanni Reda, Jimmy Chan, Jimmy Grandine and this kid we used to call Ghandi [laughing] I think Reda beat him up [laughing] Can’t forget LI Crew Ben & Dan Liversedge, Gino and Erik.
L – Seems like it’s the same crew: Gino, Eric, (you), Danny Finklestein… I don’t know it’s the same crew since I moved to Long Island. Funny to think it’s the same crew for like 20 years [laughing]. It’s weird, it’s like skaters are friends with their friends forever… Almost… almost, not all of them.

Skate Mag?
F – Thrasher, I remember Jeremy Henderson doing a crail wall ride at the Brooklyn Banks.
L – I get a lot of free mags nowadays which is kinda cool. I would say Thrasher & Transworld, I still read those.

Trick?
F – Boneless, then the ollies and then I learned how to do tricks off a launch ramp.
L – That’s a good one [laughing]!

Favorite skate spot in New York?
I have 2 spots: BK Banks and the Pan Am building.

Favorite skate shop in New York?
Supreme… that was always like the one where all your friends were at and if you go there you would hang out or meet somebody. I get to watch the new videos there in the window. There’s always someone there you know.

Favorite NY based skate brand?
I would say SHUT since they were the first guys in New York to do their own contests in Tompkins… the first ever. They brought out people like Brian Lotti, they had their whole crew killing it like Barker Barret doing pivot fakies – made me want to learn pivot fakies. Sheffey and Felix and all those guys were ill, they could skate transition and they were skating the rails, they all had good style.

Favorite crew or person to skate with in New York?
I used to skate with Josh Veleza bunch, he rips… he knows how to teach you tricks and he’s really, really funny.

Favorite New York based skate vid or section?
Hensley in the Gullwing video, do people remember that? Future Primitive too

What did you think the first time you visited/skated NY?
I felt out of place. Like everyone was commenting on you, like “skateboarding’s for California people”, or kids making fun just because I was riding a skateboard. I felt out of place, kind of like an outcast. I think I liked that better

What makes New York different than other places to skate?
You actually skate to the spot.

The Good of NY?
There’s always something to do.

The Bad of NY?
The weather, it’s awful [laughing].

Advice to anyone visiting New York to skate?
Prepare to have fun, it feels like everyone that comes to New York falls in love until it gets super cold in the Winter

Shout Outs?
Everybody that helped us out over the years, too many to mention… hundreds. Thank You to my friends and family for always supporting me! Live life and enjoy it.

First Look: The General by Vans in Williamsburg Brooklyn (2017) 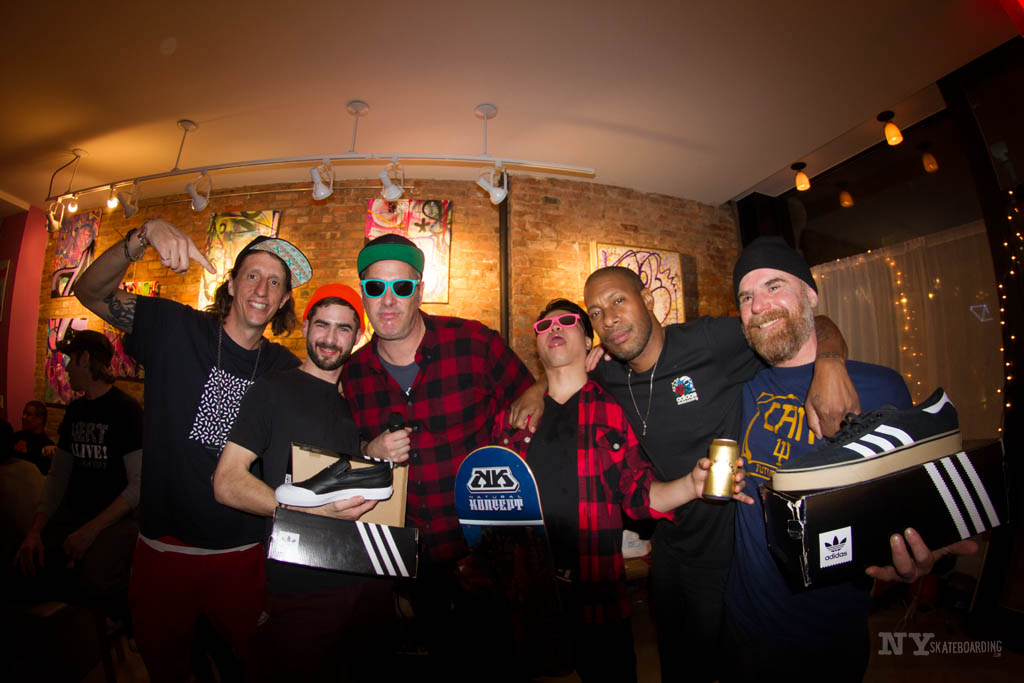